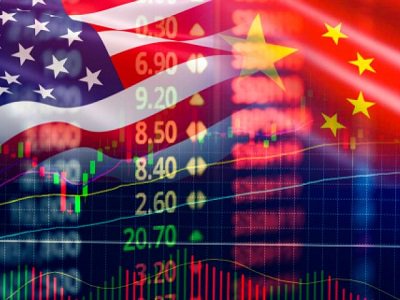 Asian stocks are claiming higher ground, after the S&P 500 closed back above the 3000 level, as news that US and China negotiators are set to hold a high-level meeting in Shanghai on Monday lifted market sentiment.

While the resumption of trade talks appears to mitigate any near-term deterioration in US-China tensions, the prudent investor will not get carried away, seeing as a meaningful deal still seems a long way off at this point in time. Global growth has already been stifled by the protracted impasse between the world’s two largest economies, along with the imposed tariffs, and investors need not look further than the IMF’s repeated downgrades to its global growth forecasts. While the prospects of central bank stimulus encourage risk appetite for equities, some measure of caution is still warranted, given the downside risks stemming from global trade tensions and Brexit uncertainties.

The Pound offered scarce reaction to Boris Johnson’s official unveiling as the new leader of the UK Conservative Party, with such an outcome having already been priced into the markets. Theresa May is set to hand over her duties as Prime Minister to Johnson later today, and with it, the same political challenges that proved insurmountable for May in getting Brexit over the line.

The question now on investors’ mind is whether the Boris Johnson of the campaign trail, will be the same Boris Johnson that will confront EU officials in charting Brexit’s eventual path? Keep in mind that Johnson had repeatedly extolled the need to deliver on Brexit, with or without a deal by the October 31 deadline. Such rhetoric has amplified concerns that PM Johnson could lead the UK towards a no-deal Brexit.

In any case, the Pound is set to remain weighed down by the political uncertainties ahead, as the UK’s economic fundamentals continue taking a back seat to the Brexit saga over the remaining 100 days before the October 31 deadline.

The Dollar index (DXY) has reached its highest in over a month, trading above the 97.7 level at the time of writing, as most Asian currencies continue softening against the Greenback. Investors are paring back expectations that the Federal Reserve would lower interest rates by 50-basis points next week, with Fed funds futures now showing a less than 20 percent chance of the Fed easing its policy settings by a bigger margin, versus the widely expected 25-basis point cut.

Dollar bulls are not taking things lying down, which has tempered gains in safe haven assets, with Gold moderating towards the $1400 level while the Yen currently trades above the 108 handle against the US Dollar. Still, there remains a strong case to be made for Gold and the Japanese Yen, as global economic risks remain tilted to the downside, evidenced by the IMF once again lowering its global economic forecast for the year.