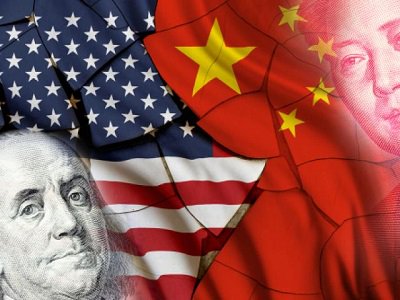 Asia stocks are on course for a positive end to what has been a volatile month, after major US stock indices gained over 1.2 percent each overnight on signs that US-China trade tensions will not further escalate in the near-term.

Nevertheless, the US-China trade conflict is still expected to have a major say over market sentiment in September. Despite US tariffs on $300 billion worth of Chinese goods set to be raised beginning September 1, another round of trade talks could take place in the month ahead. Such a possibility allows markets to continue clinging on to hope that a resolution to this protracted impasse is not dead in the water, with traders using this as an excuse to push further into risk-on territory at any given opportunity.

Dollar index on quest to erase all of August losses

The Dollar index (DXY) breached the 98.5 level before moderating, with Asian currencies showing mixed results at the time of writing. The second reading of the Q2 US GDP of two percent was in line with market expectations, which allowed DXY to edge higher, in an attempt to erase all of its losses this month.

Although investors are well aware of the slowdown in the US economy, the latest data underscored the strength of consumer spending (which makes up over 60 percent of US GDP), and shows that the primary growth driver in the world’s largest economy is still resilient.

Still, the headline figure suggests that the protracted US-China trade tensions are weighing on other components of the US economy, such as exports and investments. Faced with slowing growth prospects in the second half of 2019, the Federal Reserve’s decision to lower US interest rates appears justified, with markets pricing in two more Fed rate cuts in 2019.

Moving forward, shifting market expectations surrounding the Fed’s policy path are set to sway DXY, as the Fed’s data dependence continues to be tested in the interim. Given the resilience of the US Dollar, along with growing concerns over the state of the global economy, the risks for most Asian currencies are currently tilted to the downside.

September will also see the suspension of the UK parliament, while Brexit talks press ahead with UK and EU officials set to meet twice weekly. Even with the prospects of more engagement between the UK and EU over Brexit, the Pound has returned into sub-1.22 territory against the US Dollar.

Pound traders are well aware of the politically-treacherous path that lies ahead in the quest to find a Brexit deal ahead of the October 31 deadline. Still, Sterling’s outlook remains dismal at this point in time which is keeping GBPUSD on a slippery slope, with a likelier path towards 1.20.