The Australian dollar was thumped by the market today as CPI data missed the mark coming in at 0.6% (0.8% exp) leaving the market with a bitter taste in its month. On the back of higher oil prices and retail prices many had expected to see inflation lift and even hit the magic 2% inflation figure which might prompt the Reserve Bank of Australia into action. Sadly, it was not meant to be and the weaker figure coupled with global sentiment of weaker inflation in the mid range term means it's unlikely the RBA will get to raise rates anytime soon. So where to for the AUD? Well with the US government pushing its tax reform this could certainly boost the possibility of increasing US GDP and the USD for the most part. There has been a lot of weakness for the USD recently and that has boosted things, but for the most part it does seem realistic that they might be able to get it through. This would obviously play out well for the AUDUSD bears, especially if we continue to see weaker data in the long run. 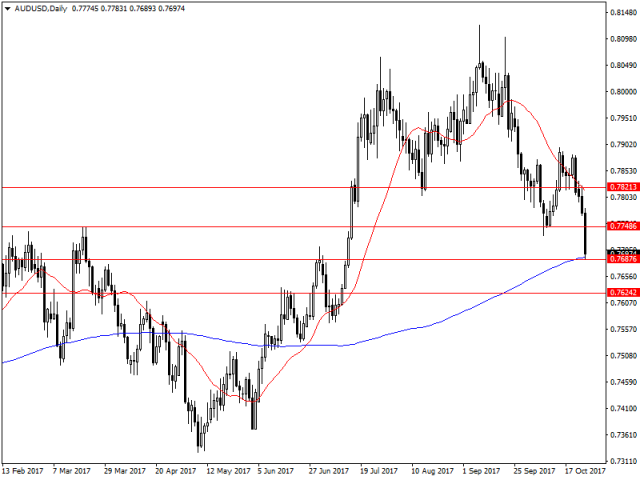 So far the AUDUSD bears have slashed down the charts at a blistering pace before hitting the 200 day moving average coupled with support around 0.7687 and pausing for a breather. Given the recent weakness in the commodity currencies I would not be surprised to see further falls down to the next level of support at 0.7624. Nevertheless, the AUDUSD does have a habit of bouncing back, so in the event it did I would expect the potential for it to modestly rise to 0.7748, but it would be hard pressed to get higher to resistance at 0.7821. In any case I do believe that the bears may hang around for some time yet and market traders are likely to target key support levels until they find any hope for the AUD.

The UK has always been struggling with the recent Brexit negotiations but thus far FTSE 100 traders have managed to avoid the brunt of it. Not to so much today as global equity markets took a big tumble, despite growth forecasts being upgraded in the US. Markets at the moment seem quite skitterish and we are starting to see long candles, which means traders are getting very aggressive to defend these bullish positions at times. 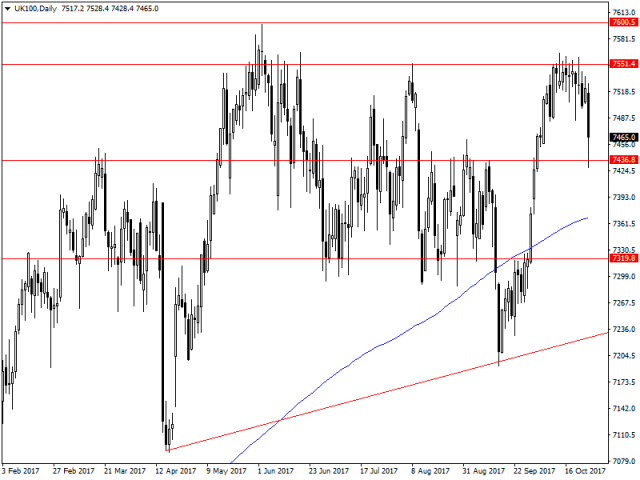 The FTSE 100 is a fantastic case of this as we saw an aggressive dive today, followed up by some aggressive buying shortly after to bring it back into line. Support was touched at 7436, but traders were quick to defend this level, but the bears still took considerable ground. The 200 day is moving up the chart and if we break through support at 7436 then I would expect an extension further down to this level. Resistance levels can still be found at 7551 and 7600, with the potential to breakthrough looking very remote at present.