This week everybody is following the Japanese GDP. The forecast is +0,5% QoQ or +2,1% YoY. Let’s try to understand whether the forecast is realistic. GDP could be calculated by summarizing consumption, trade balance, investments and government spending.

Looking at the Japanese retail sales (consumption) YoY in Q1, you may see that it is slowing down. 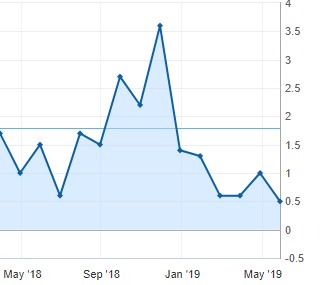 Trade balance nosedived in January. In February and March the situation became better – at least tthere was a surplus. Anyway, the two quarterly data are quite similar. 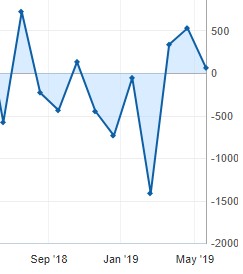 Consequently, we may expect that GDP could be lower than in the previous Q4.

Next week is also going to be important for Canada. The real estate statistics comes out on Monday and Thursday. At the beginning of the week we will follow the May data on Housing Starts and Building Permits. New Housing Price index comes out on Thursday. The higher the real estate market indicators, the better.

Now, let’s take a look at CAD/JPY from the technical side.

On the daily time frame we can see that the CAD broke the trend line up. Simultaneously, it broke the 23,6% Fibo correction level. The EMA-9 reversed and started growing.

The MACD lines intersected. The Parabolic SAR reversed too.

We expect the uptrend to continue.