First important day in the market

The CB Consumer confidence index came out on July 30. According to the survey, the index was released at the 135,7 level, which is significantly better than both the forecast and the previous result in June. By the way, the previous reading was also revised from 121,5 to 124,3. Here is some information from the survey: consumers’ assessment of present-day conditions improved in July. Those claiming business conditions are “good” increased from 37.5 percent to 40.1 percent. However, those claiming business conditions are “bad” also increased slightly, from 10.6 percent to 11.2 percent. Consumers’ assesment of the job market was also more favorable. The percentage of those stating there are plenty of jobs increased from 44.0 percent to 46.2 percent, while those claiming jobs are “hard to get” declined from 15.8 percent to 12.8 percent.

This report had a good impact on the US national currency–the dollar strengthened and the EUR/USD pair dropped from 1,11498 to 1,11416.

The pending home sales in July increased too. It came out at at +2,8% against the reading of 1,1% in the previous month. 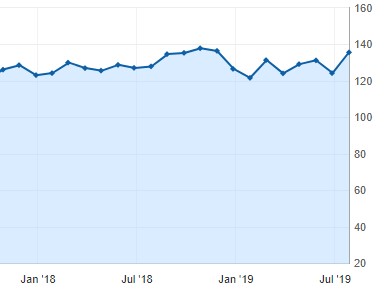 The Bank of Japan took its decision about the interest rate. As exoected, the BoJ left the interest rate at the same level of -0,1%. The central bank announced that it is going to buy Japanese government bonds to that 10-year bond yields will remain at 0% level. Also, the central bank is going to buy ETFs and J-REITs. As we already mentioned yesterday, the target for USD/JPY was 109,000. On Tuesday, the pair almost reached this level. The reversal started from 108,948. Technically, the regression line is heading down. The 9-EMA is on the 108,500 level. The Williams %R oscillator is located in the overbought zone. We think that we’ll soon get a reversal signal.