It was a day of highs and lows for the UK economy as the political speech from the prime minister did little to quell rumours she may not survive the election, and there could potentially be talk of a second referendum. However, there was positive news with UK PMI m/m up slightly to 55.8 (55.6 exp) showing some expansion in the purchasing managers index. Something that the market will be happy to see with bets increasing on the potential November rate rise. The real winner though out of all of this has recently been the FTSE 100 which has been climbing on the back of equities globally as they continue to rally, and also the positive economy data as of late. A weaker pound has provided some windfalls for large companies and the reporting out today has been positive thus far compared to expectations. 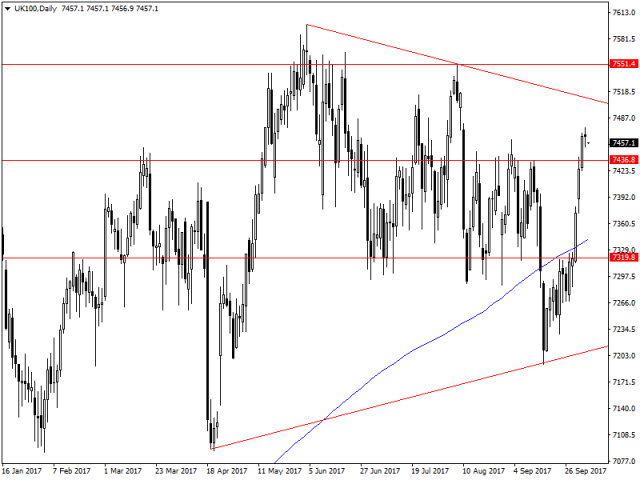 For the FTSE traders though there is one barrier which may stop the bulls in their tracks and that comes in the form of current triangle consolidation pattern we are seeing. This is a common pattern and traders on the FTSE tend to always take notice and play of these key levels/barriers. While a positive day today and with many traders expecting higher highs the FTSE has been slowing down as it approaches the trend line and traders could look to start sell-off around the 7500 level. In the event we saw a breakout higher, then I would anticipate resistance at 7551 but this would also be a very bullish signal. Support levels can also be found at 7436 and 7319 with the 200 day moving average a likely candidate to stop traffic if data is slow.

Oil was another key player today as the weekly Department of Energy data was released showing that oil inventories showed a steep drawdown of -6.02M barrels. This beat expectations of -0.5M barrels, but the market was not quick to react and in fact we saw a small drop in the price of oil. Counterintuitive; yet  caused by a build up in gasoline, lending to the idea that Americans might not be using as much as previously expected in the lead up to winter. The market is likely to remain quite strong in the interm as OPEC production cuts have had the desired effect on the market, but the battle to remain above $50.00 a barrel continues to be waged. 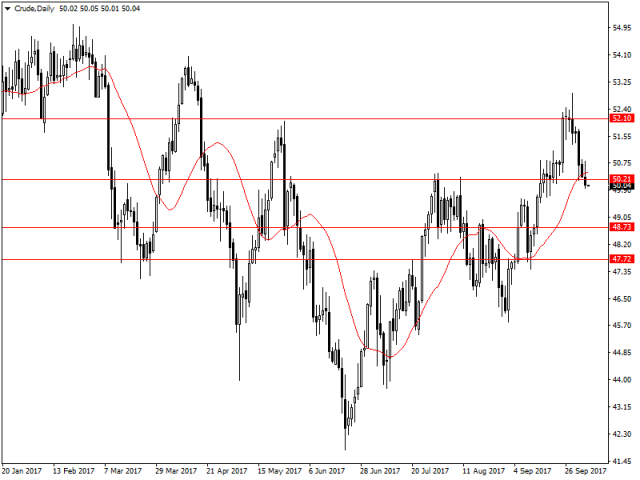 For oil traders there has been a drop on the chart as the bulls have lost some ground on profit taking and some strong levels of resistance. So far oil has dropped just under the resistance level at 50.21 and is looking all the more bearish. In the event it did drop lower, I would expect strong support at 48.73 and 47.72 as both levels have seen plenty of action over the past year. A swing higher in the market is likely to find very strong resistance at 52.10.