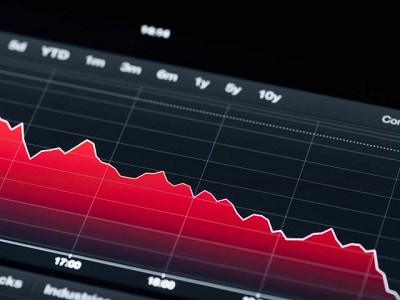 After climbing to a one month high on Tuesday, the S&P 500 declined 2.2% yesterday and more losses are set to follow today with futures indicating a lower open.

It is no surprise that economic data will take a steep hit given the lockdown imposed on all US states, but the shockingly weak figures released yesterday explains why investors returned to being defensive.

US retail sales in March dropped 8.7%, the sharpest decline ever recorded, and worse than median expectations of a fall of 8%, and New York manufacturing activity hit an all-time low of negative 78.2%. Meanwhile, industrial production contracted 5.4%, the largest decline recorded since World War II and homebuilder sentiment also took a severe hit posting its largest monthly decline ever in April.

The terrible data released on Wednesday only reflects two weeks of lockdown following the national emergency declaration by President Trump which occurred on March 13. That suggests the hit to economic activity in April will be much more severe and possibly worse than previously anticipated.

The economy is clearly in a frozen state at the moment and it’s very difficult to know with certainty when the wheels of the economy will begin to move again. Even if Trump announces guidelines on reopening the economy later today, there is still a high risk of entering a second and possibly third round of lockdowns if the COVID-19 reinfection rate accelerates. Such uncertainty makes analysts and strategists’ jobs much tougher as many variables remain unknown and cannot be calculated in valuation models.

At this stage, we are trying to assess what type of recession we will experience. Even if infection rates begin to slow down, that doesn’t necessarily translate into a speedy recovery in economic activity. We are only three weeks into April but more than 17 million Americans have lost their jobs, and today we are bracing for more dire data in the weekly claims figures. Economists forecasts are ranging from 1.4 million to 8 million new jobless claims, which is an incredible range in estimates.  If the figures hit the high side of the estimates, expect to see a further decline in equities.

However, in that environment, the Dollar should remain strong as it will be driven by wider risk aversion and not the strength of the domestic economy. So for today especially, the worse the data, the stronger the Dollar.