What can we say about Japan? Overall, Japan had a good week. On Monday, there was a 0.1% decline in Services PMI as compared to the previous result, but this was followed by good news from the Japanese economic calendar. Data on household spending, adjusted current account and GDP exceeded analysts’ expectations.

Today, Japan has released its GDP at 1.8% (prev. 2.2%) YoY and 0.4% (prev. 0.6%) QoQ. The results are showing a slight decline but the data is better than the market expectations and goes in line with our yesterday USD/JPY forecast.

The better than expected GDP data is due to an increase of household spending, which grew by 0.6% quarter-on-quarter. There were 10 days off in late April and early May in Japan due to the enthronement ceremony of Emperor Naruhito, which boosted spending. Sales of durable goods also increased on a tax hike from 8% to 10% on October 1, 2019. 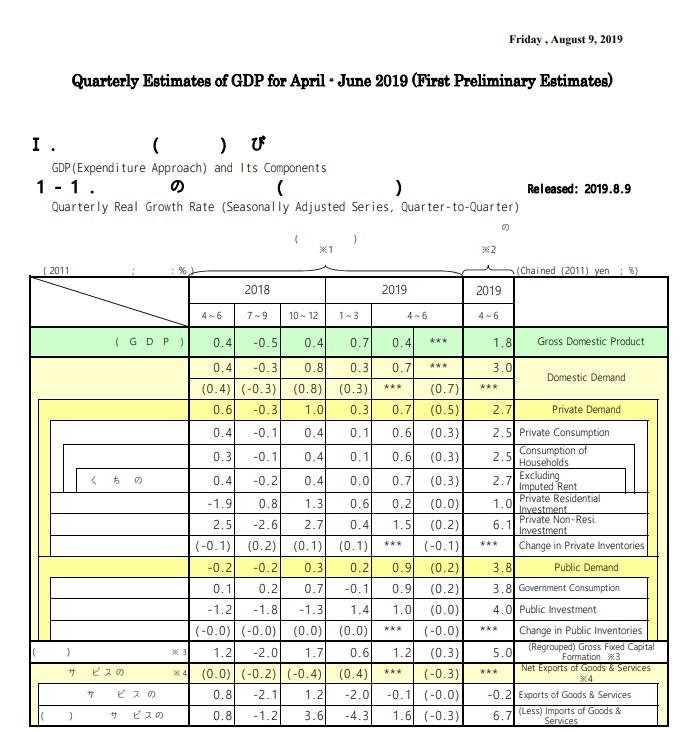 In the United Kingdom, the week began with an increase in Services and Composite PMI. The results exceeded the market expectations, and were better than the previous readings of 51.4 and 50.7, respectively. The industrial production declined, but less than the analysts had expected, and manufacturing production decreased as well.

The UK has released its GDP today, and the figures show a decline by 0.2% in Q2 2019 (Apr.-June). According to the National Statistics Office: 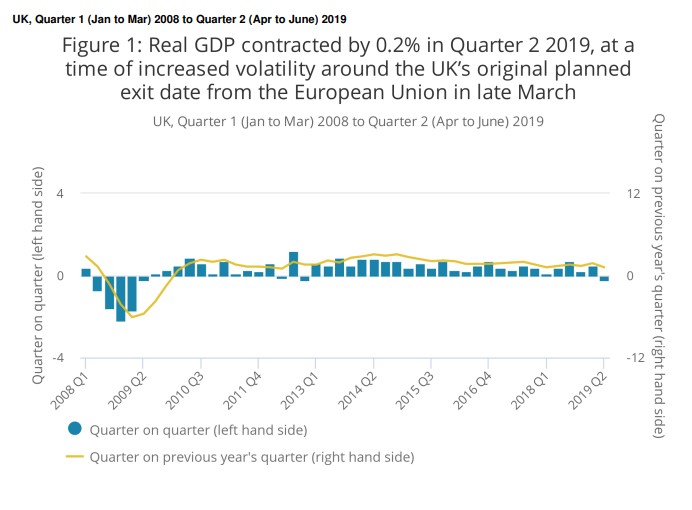 Next week, follow the data on UK average earnings and employment on Tuesday, followed by the CPI and PPI on Wednesday and Retail Sales on Thursday.

The only important day for Japanese currency will be next Thursday, when the the country reports on its industrial production.

Technically, the GBP/JPY pair has been sharply declining since May 6. The daily TF shows a local downtrend that started on July 26-29. At this same time, the MACD lines interested and the Parabolic SAR reversed. The price is below the 9-EMA, and we also have a local trend line down, which goes in line with the moving average. All these indicators give us a signal of a downtrend continuation.

Further movement down may return the support level of October/November 2016 near 127. One should only think of long positions if the price breaks the local trend line and the 9-EMA up.