Netflix (NFLX) will report its Q3 earnings results on October 16 after the market close. Netflix is the streaming entertainment leader, with some 60 million domestic and 91.5 million international subscribers. NFLX reported a 26% revenue growth for 2Q while the operating income increased by 53% year over year in Q2. Paid membership grew by 2.7 million, less than the 5.5 million in Q2 a year ago and the company’s 5.0 million forecast. Annual Average streaming paid memberships increased 24%, while annual revenue per user (ARPU) increased 3%. EPS amounted to $0.60 vs $0.85 and included a $61 million non-cash unrealised loss from FX remeasurement on EUR-denominated debt. Streaming content obligations decreased 2%, reflecting our shift to more owned vs licensed content. Netflix also missed forecasts in all regions internationally and said it struggled slightly more in places where increased price during the year. Netflix added 2.8 million subscribers internationally. 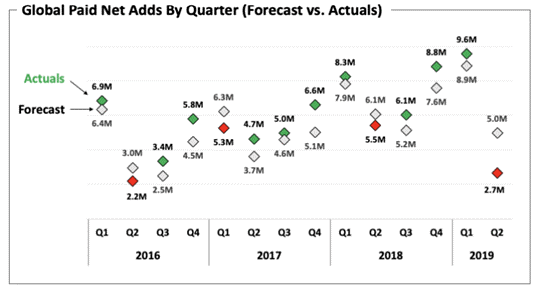 Netflix Marketing
As NFLX has shifted to original content, Netflix marketing has evolved to increasingly focus on launching key titles to build excitement amongst existing users and non-members. NFLX continues to invest in owned media, where the company can have a strong and direct relationship with fans. The company also building a new licensing and brand partnerships effort, which is optimizing for fan and viewer engagement over revenue maximization.

Product and Partnerships
Netflix entered into a partnership with AT&T in the US to integrate Netflix into its new set-top box. The company is now partner with a wide range of ISPs and multichannel video programming distributors, including Comcast, DISH, Verizon, T-Mobile, Charter, and Altice, in addition to AT&T. The company is not planning to add advertisements in its streaming. “We believe we will have a more valuable business in the long term by staying out of competing for ad revenue and instead entirely focusing on competing for viewer satisfaction.”

Competition
In the upcoming months, Apple (AAPL), Disney (DIS), WarnerMedia, NBCU and others are joining BBC, Amazon (AMZN), Hotstar, YouTube, and many others in offering streaming entertainment services. The innovation of streaming services is also driving home viewers to shift more and more from linear television to streaming entertainment. With so many big players entering the streaming market, a price war could force NFLX to lower its subscription fees. Apple launches its service on November 1st at $4.99 a month. Disney will launch Disney+ two weeks later at $6.99 a month. Netflix in the past had no problem competing against services that are cheaper than the $12.99 a month it currently charges for its most popular streaming plan, but things might change this time as well-capitalized competitors like Apple and Disney enter the market.

NFLX Technical Analysis
Netflix’s stock is down 22% over the last 52 weeks and has lost a quarter of its value since it reported its Q2 results in July, so a lot of the negative sentiment is already priced into the stock.

In the technical side, the picture is bearish for the long term as NFLX trades below all major daily moving averages. NFLX price has been trapped inside a descending channel since July 2019 which drove the price to lower levels. The correction which started from July 17 level of $365 after the release of 2Q earnings which fell short of its own second-quarter subscriber estimates, drove the price down to $253 on September 24th. Immediate support for NFLX stock stands at $257, the low from October 3rd, while a break below might drive prices down to 10-month lows at $252. On the upside first resistance stands at $282, the high from September 20th while more offers will be met at $291 the 50-day moving average, next resistance can be found at $323 the 100-day moving average. Bulls need to push the price outside of the descending channel in order to attract more investors to get in and build a positive momentum.

All in all the technical picture is not bright for NFLX, but the 3Q earnings results might provide the catalyst to reverse the downtrend.