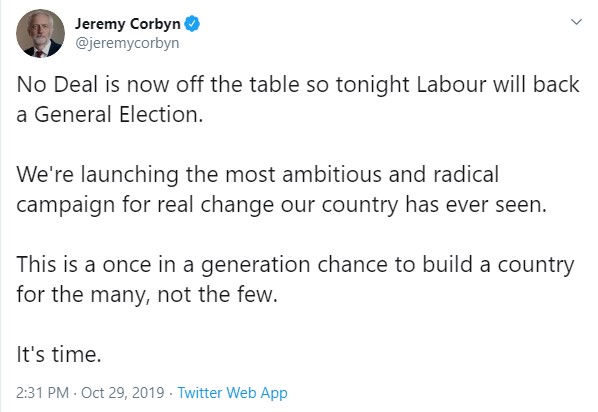 Mr. Corbyn has long been opposing PM Johnson and Brexit in general. His most recent stance was to oppose a snap election, unless a No Deal Brexit option was taken off the table. It was, and the United Kingdom is very likely to have a general election in December. The possible date is between the 9th and 12th of December. This is the first election to take place in December since 1923.

December is not a great time of year for an election due to weather and other unpredictable factors like winter illnesses that may have an effect on the polls. But if this breaks the stalemate between the parliament and government perhaps the UK and the EU can finally finish this Brexit ordeal.

As a result, on the daily time frame, the British Pound rose a little against the Japanese Yen but could not get over the resistance at around 140.343, 61.8% Fibo. The 200EMA is now acts as support at around 137.707, 50% Fibo level. RSI is slightly below the overbought zone, and ADX indicates a strong bullish trend.

GBPUSD correlates with GBPJPY (displayed as the yellow line on Daily GBPUSD Chart below) so you may use it to your advantage.