Oil comes under pressure, while the Turkish Lira continues to struggle

It has been a double whammy for oil markets today as a strengthening USD put some serious pressure on oil prices and as the OPEC forecast report for 2019 showed that they anticipated demand being lower than expected. It was quick to also point out that 2018 demand was 600k lower than expected as well, but I feel markets had priced that in some time ago. While Saudi Arabia has also cut production over the course of 2018 other members such as Kuwait and UAE have looked to increase production as oil prices have recovered back to normal levels. Going forward the 70 price barrier continues to be a real threat for oil bulls, as the USD has been incredibly strong during the course of this year. However there is hope yet for the bulls. 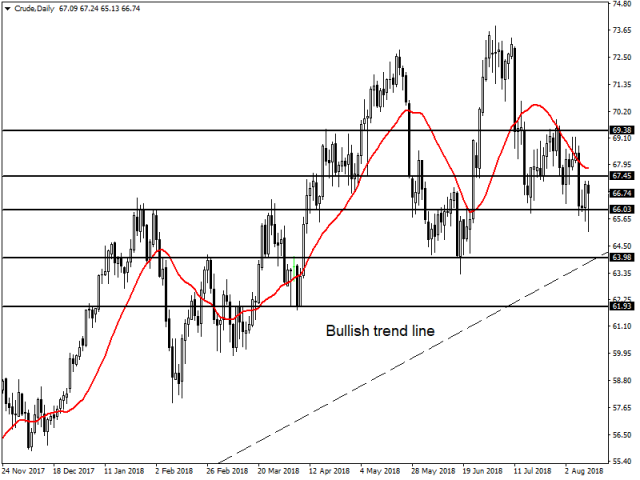 Looking at oil on the charts and we are starting to near the key bullish trend line which has helped propel oil from previous lows around the middle of 2017 and is starting to come very close. This I feel will be a key opportunity for bullish players in the market who are looking for some reprieve in this environment. If the trend line was to break then I would expect the bulls to really power through from a technical perspective. However, the US economy continues to strengthen which is helping demand so I don't believe we could see lows as far as the $50.00 a barrel level. The key support level here is of course 63.98 which will be around the trend line and will be for me the line in the sand to stop bearish movements. Beyond this and we could have an extension down to 61.93 in the long run. If we do see a strong bounce around the trend line area then resistance can be found at 66.03 and 67.45; with the long term 70 dollar mark likely to be a hard ask based of the recent OPEC report.

The other key mover in the market that is under some serious pressure is the Turkish Lira, as markets are looking to exit the market as fast as possible after recent sanctions. The market is increasingly worried about the measures the Turkish government may take, as it may look to stop all capital outflows from Turkey in an effort to contain the situation - something that is probably propelling markets forward at present.

It's genuinely hard to figure out the present market but analysts have commented that at 7.1 to the USD things start to fall apart for the Turkish economy and banks come under immense pressure. So the market will be watching to see how that transpires, and resistance has formed around the 7.100 level. If the market does decide to retreat you can expect support levels to be found at 6.767 and 6.3946, but I would be cautious around how volatile it all is at present.