It's been a crazy day on the markets and the GBPUSD has been a clear winner when it comes to movements today as the Market has reacted positively to the so called 'Divorce Bill' from the EU that Britain is meant to pay. So far people are expectong the figure to come in around 50-60 billion pounds that would be paid out over 40 years. Obviously, this is a large number for any sovereign nation, but it enables Britain to plow forth in its so called negotiations. The market is now looking for the next steps for the UK economy, as it expect to see some sort of trade negotiations come out of all of this. I do think that it might be a bit of a while off that we do see something realistic, the fact being that a) the UK has no strong leg to stand on, and b) it's always a long road to what people expect will be a result. Either way the volatility in the GBPUSD is likely to continue into the near future especially with the current pace of news and politics involved in Brexit.

On the charts it's clear to see that the bulls are back into the market and are climbing higher. Yesterday we were talking about the 1.33 levels, and today we are in the 1.34 levels which shows the market is keen on these talks. After touching resistance at 1.3438 the market has pulled back to take a breather, but the real key level is to be found at 1.3588 which is where bullish traders will be looking to aim in this market. In the even the bears do regain control and look to push it lower then support at 1.3339 is likely to be a prime candidate for support as well as 1.3256. Traders should also be aware of the previous trend line which continues to be an obstacle for any bears in the current market.

The US also continued its stellar run today with US pending home sales m/m lifting by 3.5% (1% exp) once again showcasing the strength in the USD. On top of the traders were also somewhat bullish about the first round of the senate tax review of the Trump tax bill, which is likely to boost the US economy - even though running a deficit for a bit. One of the big losers for this has been the commodity currencies which have been bearish against the USD with all this support. 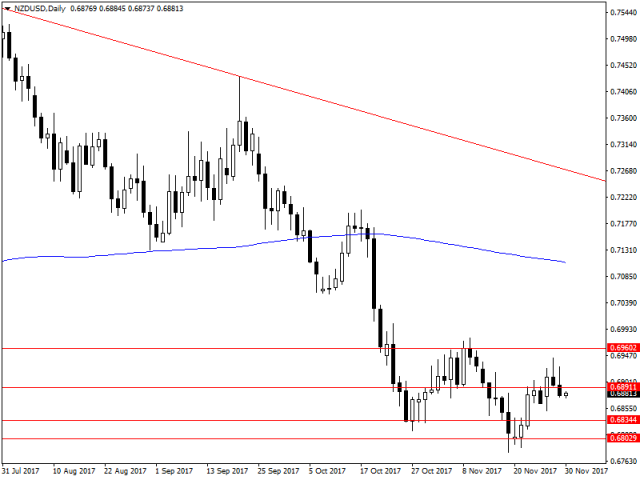 For me the NZDUSD continues to be one of those currencies that will struggle with a resurgent USD in the current market climate. So far all the candles have shown exhaustion by bulls in the market as the NZDUSD dipped under resistance at 0.6891. The market is now looking to extend further lower to 0.6834 and 0.6802 on the charts, as the market looks to push it back into the red. For me the bulls are going to be a real threat until the USD gives up some ground as the NZ economy is still struggling in the interim while it figures out a new government.