Rumors continue to drive the market

The British Pound rose on rumors that the Brexit deal is progressing. The EU lawmakers and UK PM Johnson are finally discussing the next Brexit steps. The European Commission President Jean-Claude Juncker first told Sky News that "we can have a deal". Then this tweet and article followed: 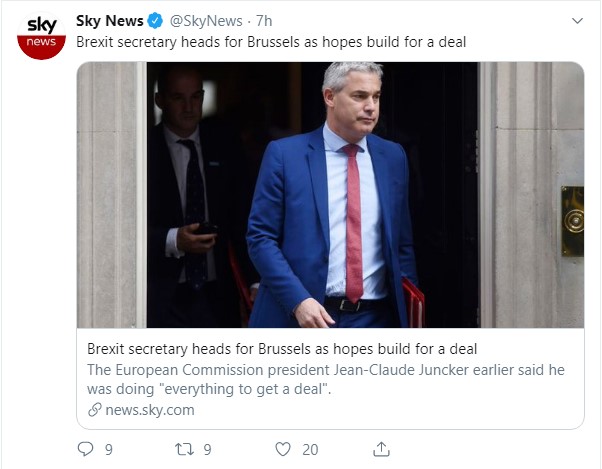 Actually, it’s way too early to start clapping. The Irish Foreign Minister Simon Coveney agreed with Juncker’s sentiment with a statement on the BBC that said “I think the mood music has improved,” “But I think we need to be honest with people and say that we’re not close to that deal right now. But there is an intent I think by all sides to try and find a landing zone that everybody can live with here”.

Investors will continue to closely monitor the developments of the Brexit deal that will affect the pound.

In the United States, trade negotiations resumed on Thursday. This is the first meeting in almost 2 months in preparation of high-level talks in early October.

Some of the key issues being discussed is agriculture, intellectual property and synthetic opioid fentanyl. The United States is said to have temporarily cancelled tariffs on 437 types of products from China like Christmas tree lights, plastic straws, dog leashes, to name a few. This is to be confirmed today by the U.S. Trade Representative.

U.S. Agriculture Secretary Sonny Perdue said some members of the Chinese delegation will stay in the US and visit the farmland.

Both sides are showing an easing in tensions before the October talks. Earlier this week, China’s tariff exemption on 16 American products went into effect on September 17th. Some products on the exemption list include food for livestock, cancer drugs and lubricants.  In turn, President Donald Trump delayed tariff rise from October 1st to October 15th.

The world will be watching the US-China Trade war developments very closely in the next few weeks and releases are likely to affect the USD.

Now let’s look at the technical side of the GBPUSD pair.

On a 4HTF we can see that the day started with a blow to the strong level of resistance. The shadow that created the highest high since early July (highest high for the past 2.5 months) at 1.25821, which is also a strong area of resistance.

Now there are 2 possible scenarios. The pair can move up on optimistic news from the UK and/or on pessimistic news on the US-China Trade War. Another scenario implies moving down against the background of bad Brexit news and/or upbeat data on the trade war between the US and China.

So, we will consider BUY and SELL targets.

I would also like to note that the asset price has been using the base line of the Ichimoku Cloud as a support level, therefore a breakout and closing beyond this level may be monitored for short positions.