Trump is unsatisfied with Fed… Again…

Trump is unsatisfied with Fed… Again…

Time and again Trump is using his account in Twitter to criticize the Federal reserve system. At first, he commented on New York Fed president John Williams’ statement that ‘Fed ‘raised’ far too fast and too early’ and after that he twitted: ‘…Fed there is almost no inflation’. 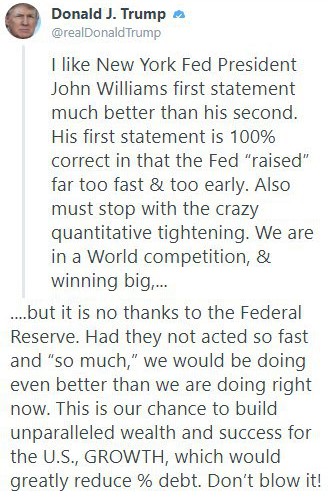 Meanwhile the situation with Iran continues to deteriorate. US officials stated that they destroyed an Iranian drone on Thursday and Financial times quoted the U.S. secretary of treasury Steven Mnuchin: ‘abide by US sanctions on Iran or drop the dollar’. Mnuchin gives a hint that countries that are not supporting sanctions may be cut off the dollar system.

Brent oil prices almost did not react on this new portion of negative events. The movement down is connected with new worries around the slowing in Chinese economy. The International Energy Agency changed its outlook for oil demand growth in 2019 to 1,2 million barrels per day.

On 1D TF Brent oil bounced back from 200-EMA and started plummeting. The target is 60$ per barrel.