The average pay excluding bonuses in the UK increased faster than expected during the three months ending July beating estimates. The pace of gains was the highest seen in three years; official data showed on Tuesday.

The UK's central bank had long held the view that a tighter labor market due to a shortage of skilled workers would eventually lead to faster pay growth. However, it was estimated that the pace of gains in wages would not be at the same level since the pre-crisis era. 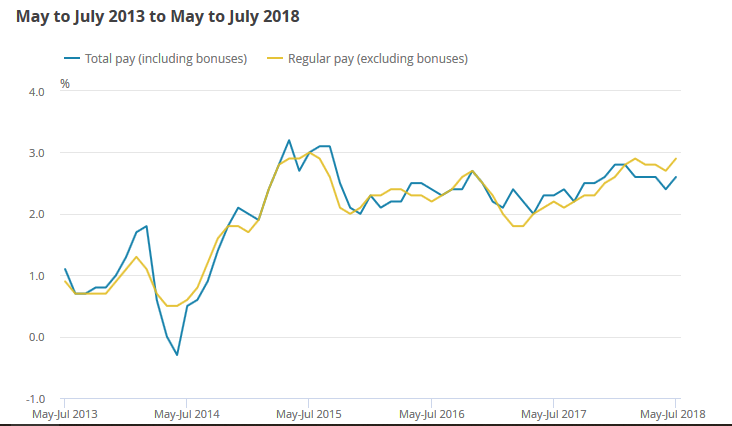 The steady pace of gains in wages is expected to put upward pressures on domestic inflation. Both measures of wages, including and excluding bonuses increased beating estimates.

Earnings excluding bonuses rose 2.9% on the year in the three months of July. This was a higher pace of increase compared to June's gains of 2.7%. The speed of growth was the highest since July 2015.

The total earnings increased from 2.4% to 2.6% for the three months ending July.

Unemployment was seen falling by 55,000 in the three months to July to 1.36 million. This came despite a sharp increase in the inactivity rate which jumped to 21.2%. The inactivity rate increased 0.3 percentage points from the February through April period.

The Labor force survey which measures the joblessness was seen holding steady at 4.0% during the May through July period. This was unchanged from the second quarter and was in line with the median estimates. The UK's unemployment rate continues to remain at its lowest since the three months to February in 1975.

The data also matched the Bank of England's forecasts which expected to see the unemployment rate holding around the 4.0% level as published during the quarterly inflation report released in August this year.

The jump in the wage growth was also as forecast by the central bank in August. Officials noted that some proximate indicators supported the view of higher pay increase and further strengthening.

With wages rising sharply, it has managed to outperform inflation. The UK's inflation rate was seen at 2.5% in July on an annual basis. This pushes the real wages to 0.2% during the period. The 0.2% increase marks a modest gain from 0.1% previously.

The UK's jobs report also showed that job vacancies increased by 4.1% in July. This was a slight increase from 4.0% previously.

The wage data comes in the back of the GDP report published earlier in the week. Data from the Office for National Statistics showed that the UK's economy advanced 0.3% on a month over month basis in July. The gains came with the services sector driving GDP higher, followed by the construction sector.

Overall, despite a much-needed labor market report that showed rising wages, the outcome of the Brexit deal remains in question. With the UK’s labor market facing a shortage of skills and the EU’s workforce declining in the UK, questions remain about how the UK will cope.

The pound sterling was volatile last week reacting to headlines from Brexit. The currency jumped after Michel Barnier, the EU’s chief negotiator said that a Brexit deal could be reached in the next four to six weeks.

However, the currency gave up the gains with no follow through on the headlines.