During this period markets don't traditionally move much, but in this case it has been all very exciting with certain equity markets reaching record highs, commodities on the move and of course certain currency pairs making the most of it. For me the USDCAD has been one of those pairs which has been looking very interesting as of late. The recent USD strength has failed to materialise between the pair and so far it's looking like the CAD is starting to wrestle control. Adding fuel to this was of course today's consumer confidence reading of 122.1 (128 exp), which is very surprising given the recent rises in US economic confidence as of late. Even the jump of US pending home sales m/m to 0.2% (-0.39% exp) was not enough to falter the bears as they looked to swipe sharp and hard on the USD in this period of low liquidity. There is obviously one more load of data to come, but with NAFTA on the line in the future and the possibility of the Bank of Canada lifting rates - it could be the case that the USDCAD becomes one of the most interesting trades in the long run. 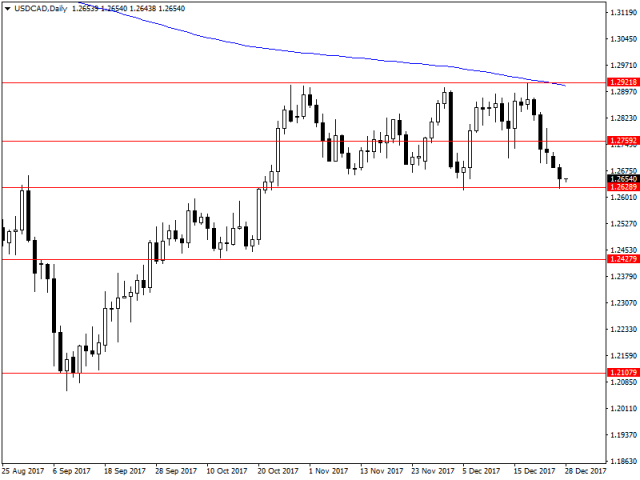 On the charts it's a case of ranging, but looking to break out and find some direction. As we've previously seen the USDCAD does move sideways, but when it does trend it can do so for long stretches of time. The pressure on support at 1.2628 is a line in the sand moment as the market looks for direction. A breakthrough at this point could lead to further selling to support levels at 1.2427 and 1.2107 on the charts - though a proper trend could be much deeper. If the USDCAD continues the range game then traders will be targeting resistance at 1.2759 and 1.2921 on the charts, but also of course the 200 day moving average which is making its way lower.

With the recent movements in the markets I touched on silver yesterday and the movements it's currently making. So far it is being used as a hedge against crypto currencies, but also getting a boost from a weaker USD. The question now remains as to how much more movement there is for the bulls after recent events and if we could see a strong rally.

From the technical perspective, we've seen silver rally strongly to just below resistance at 16.820, but just touching on the edge of the Bollinger band. Showcasing that markets are not so keen to see further extensions at this time. That being said, it does not mean that any market rallies have stopped, in fact we could see further extensions higher but it's more a weight and see at this stage. In the event we do see silver bears come into the market expect pressure on support levels at 16.525 and 16.355 in the current market climate.