Oil’s ongoing oversupply woes reached an ear-piercing crescendo during Tuesday’s trading session as WTI Crude plunged into a bear market after growing signs of rising production across the globe. WTI Crude was already extremely sensitive and vulnerable to losses amid the bearish sentiment with reports of an unexpected supply increase by Libya sending prices below $43. Although OPEC initially displayed good intentions when it exempted some members from the production cuts, this has come back to haunt them with more production from Libya, Nigeria, and Iran. With the bias towards oil heavily tilted to the downside, further losses should be expected as bears exploit persistent oversupply concerns to ruthlessly attack the commodity.

Investors who were ardently waiting for signs of OPEC’s strategy to balance the saturated markets are starting to lose patience,  which is reflected in the bearish price action of oil. Although the cartel may be commended on its ability to follow compliance with compliance with the output curbs in May reaching 106%, this was simply overshadowed by a jump in supply in the same month as output recovered from Libya and Nigeria. While depressed oil prices could create some headwinds for the extraordinary growth of US oil production, it should be kept in mind that US Shale has displayed resilience against low oil prices in the past and could do again in the future.

It is becoming clear that the fundamental reason for repeated weakness in oil prices lie in the high global crude inventories. If US Crude inventories remain at elevated levels and US Shale’s aggressive production continues to overshadow OPEC’s cuts, oil is likely to remain depressed for prolonged periods.

Much attention will be directed towards the weekly US inventory data this evening which could fuel the downside if there is a build in Crude inventories. From a technical standpoint, WTI Crude is heavily bearish on the daily charts. The sharp breakdown and daily close below $44 should entice sellers to target $42 and $40 respectively.

Sentiment towards the Chinese economy received a boost during late trading on Tuesday following the MSCI’s decision to add China A-Shares to its MSCI Emerging Market Index. This positive development marks a major step for Beijing as it sets out to open its financial markets in a bid to attracting foreign investment. The MSCI inclusion is a big deal and a great benefit to China’s stock market seeing as many foreign investors gauge the performance of their portfolios against the MSCI Index, which currently has about $1.6 trillion in assets.

Gold received a pummeling at the start of the week with prices descending towards $1240 as the Greenback regained its attitude. Hawkish comments from Federal Reserve Bank President William Dudley have renewed expectations of further rate hikes this year and which contributed to Gold’s woes. Although a stabilizing Dollar and rising rate hike speculations may punish the yellow metal further, risk aversion could still offer bulls a lifeline in the medium to longer term.

Prices have already bounced from a five-week low at $1241 during early trading on Wednesday and could edge higher if intraday bulls exploit a breakout above $1248 to send the metal towards $1260. A situation where bulls fail to secure control above $1240 may open a path lower towards $1220. 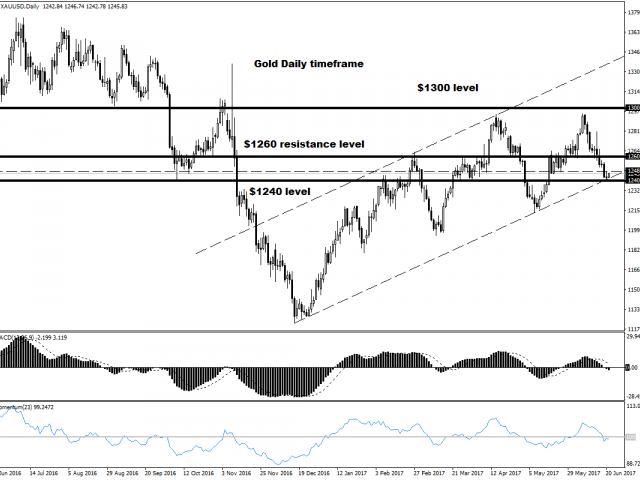