Headlines of the news are hinting at recession. The continuation of the trade war is wreaking havoc in the global market. In early August, Donald Trump announced additional tariffs on China starting on September 1, which led to a sell-off in the stock market. On Tuesday, President Trump on Tuesday announced a break by delaying the imposition of tariffs on some goods till December 15 to soften the impact on US customers for the holiday season ahead. In response, the stock market recovered for some of its losses but the momentum did not last long.

In economic terms, it makes sense when the yield on long-term investments is higher than that on the short-term ones, and when the situation is different, it is a sign of warning for the economy. Historically, a yield curve inversion leads to a recession, which follows in 12-18 months.

The yield curve inversion is caused by the market uncertainty and a loss of confidence in long-term investments. Fear of losses triggers risk aversion, and investors are now looking for safe haven and minimum risk assets.

D. Trump blamed the Fed for this “CRAZY INVERTED YIELD CURVE!” saying that the FED was too quick to raise the rates, and now is too slow to lower them. 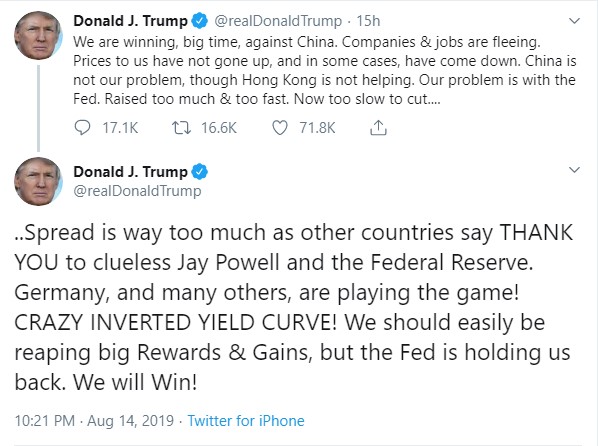 The thing is that central banks around the world have not been able to restore their interest rates to historically normal levels since the recession in 2008. In some cases, like those with the ECB, BOJ and SNB, the current interest rates are at 0%, -0.10% and -0.75% respectively, which gives no way of restoring the economy during a crisis, such as a recession. The zero to negative interest rates are also a phenomenon which makes no economic sense because banks are now giving loans and then paying even more for borrowing the money. There is an opposite story with bonds. Today, Japan and other European governments can sell bonds with negative yields. Which means that the government borrows money and actually gets paid for it. Currently, about $15 trillion in global governmental bonds, which is about a quarter of the market, is now bringing negative yields. This is a sign that investors are so uncertain of the future that they would rather settle with minor losses as long as it’s a safe haven asset to protect their wealth.

Aside from bonds, GOLD is another top safe haven asset. It is now trading at 1519 against the USD, and it reached its high yesterday at 1535. This is the highest price since gold dropped in April 2013.

Yesterday we analyzed USD/JPY. Today we can see that the pair slipped backwards and broke the 23.6% Fibo up on US news releases. Retail sales and non-farm productivity came out at better than expected levels, while initial jobless claims and industrial production results were worse than expected. As a whole, today the pair is trading bullish.

Let’s analyze another safe haven, the USD/CHF cross pair. On a daily TF we can see that August 13 is a sort of Bullish engulfing candle, which covered the previous 4 days of bear power. Although being bearish, the yesterday candle doesn’t show us lower prices. On the 4H TF the chart look quite similar to the one of USD/JPY. The price broke the 23.6% Fibo up. Shortly thereafter, the price broke the 9 and 20- EMA and closed above the MAs. The MACD histogram is raising as well. Long positions will have targets close to 0.97799 (38.2% Fibo), followed by 0.98170 (50% Fibo) and the pair can move back to 0.98540 (61.8% Fibo). Short position traders have to watch the strong area of support around 0.96561. One should also monitor the pair tomorrow during the release of US Building permits and Housing starts.