Global crisis: now and before

As the coronavirus already made its way into the pantheon of the worst world economic crises causes, it makes sense to compare it to some of the previous global troubles we have been to. But before we go into comparing the economic consequences of the current pandemic, let’s compare the human damage of the COVID-19 to other global diseases the world has faced so far, just to put things into perspective.

This is the damage of the coronavirus so far: more than 330,000 confirmed cases and 14,474 deaths globally. The map below shows the distribution of the infection, which is now most severe in Europe, the US, and Iran, apart from China itself. 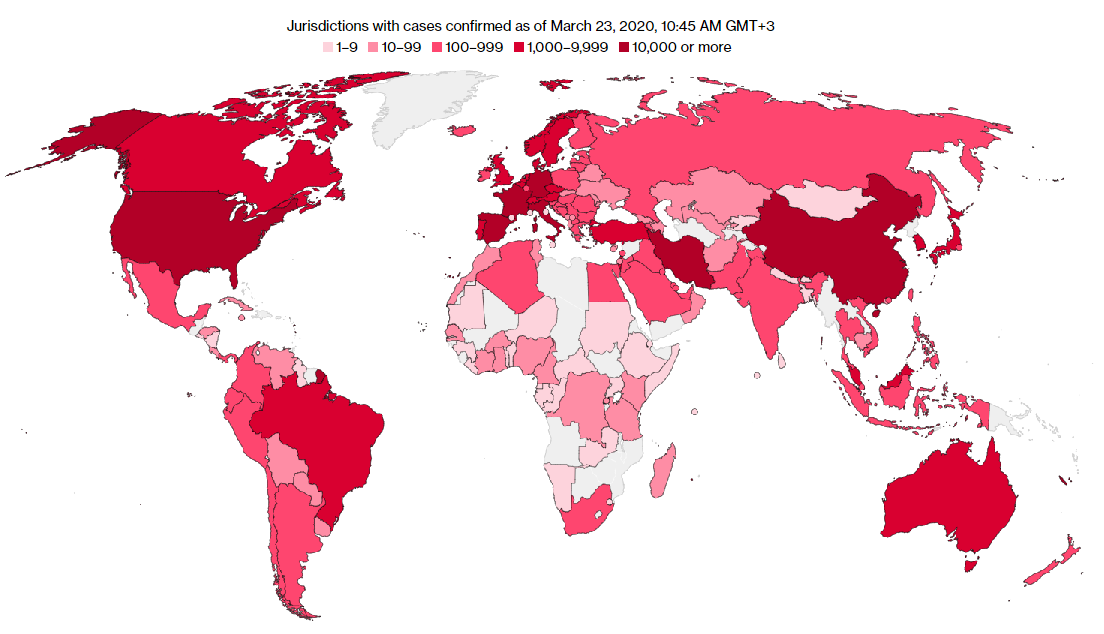 While the worldwide spread of the virus is a frightening sight (which becomes even more frightening with the media propagating it), let’s now compare the human damage of the virus with other historical cases the world has had up to date.

This is a visual guide, which brings some consolation in its horror. Given the fact that the number of cases in China, where the virus is said to have originated, is already two weeks past the peak of total infections, we are likely to see the same worldwide in about another two weeks if not earlier. In consequence, the total expected human damage is expected to be significantly lower than that of the most recent historical pandemics.

Also, as you have noticed, this presentation is vastly outdated: it shows 2,763 mortal cases across the globe on February 26, almost a month ago. And that is good news: statistics say that the other mentioned diseases were spreading much faster than growing from almost 3,000 to "just" 14,400 deaths in four weeks. Obviously, this “just” only refers to the mathematical perception of the virus spread and merely wants to say that the expansion of the disease doesn’t go with exponential acceleration but increases rather linearly. Otherwise, every single one added to the count is someone’s life and someone else’s tears will lament it, as much as we wish no one to pass through this.

Now, as we foresee the end of this story, another story starts to unveil itself to an observer as the true danger to the world is not in the virus but in its economic consequences.

The virus comes and goes, taking thousands of human lives with it – that’s the reality of its immediate effect. What about the full scope of consequences?

Observers already started counting as the virus countermeasures have started taking their toll on the global economy and the horizon is not yet visible. How bad is it economically? Say, to 2008? 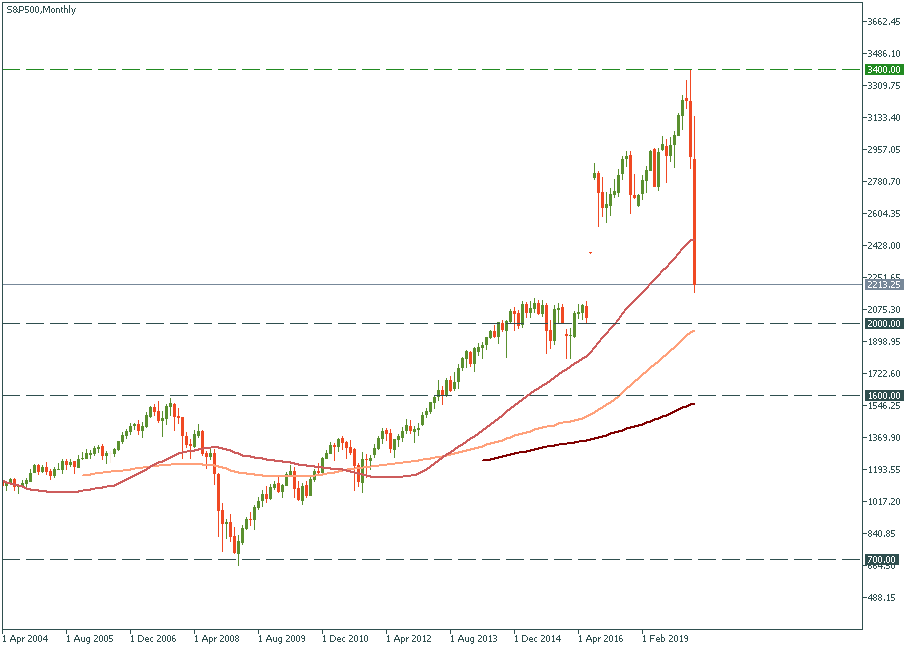 The crisis of 2008 forced the S&P down from 1,600 to 700. That was a 56% reduction. Currently, the indicator is at 2,200 – that’s after it made its all-time high at 3,400. Meaning, it dropped by 35%. Some predict a possible drop to 2,000 as a worst-case scenario, but even so the reduction will not be more than 41%, and such a scenario is considered to represent the extreme red part of the outcomes spectrum. So from the stocks point of view, the coronavirus is not that deadly in its damage as the credit crisis of 2008 was. However, that all is just so far. Even with voiced out opinions that the time of recovery is already somewhere beyond the pass, we will see it only when we get there.

At the same time, there are opinions that point out that the current situation is and will likely get worse than in 2008.

For example, job losses in the US may exceed 1mln according to preliminary analysis – that is significantly higher than in 2008. As this a fundamental factor, it may lead to dire consequences much beyond what is in forecasts now.

“Side” factors such as the oil price war aggravate the situation forcing the global market into depression and turbulence. The slide could have been weaker but overlapping with the virus consequences, the oil price war takes on a new level and becomes a central rather than a side factor.

In addition, the international cooperation is at an inferior level to that of 2008. Isolationism and state individualism is the main international policy line there days – it was not like that (at least, not to this extent) 12 years ago. It is important to consider this as the economic fires could have been quenched more easily and quickly if faced collectively but this most likely will not happen. In the Old World, the UK is in the middle of Brexit and is not willing nor it has any legal mandate to lead Europe out of the financial crisis. Europe itself seems much more fragmented than in 2008.

For this reason, too many fundamental factors make the current situation different from what was more than 10 years ago. That complicates any comparison and scares the observers even more as they do not really know what they are facing.

2008 was “just” a credit crisis – it was a problem created by humans and was controllable as such. No one was dying and states did not have to shut their borders. This time it is very different: the world is facing a natural threat, a microscopic living thing, something that kills people and cannot be managed just by making balance sheets transparent. Thus, phenomenologically, we are living a precedent. Let's hope for the best then, and prepare our trades well.

Read more about this

Take $100 No Deposit Trading Bonus on Zenfinex
18 April 2021
Step by step instructions how to Take $100 No Deposit Bonus: Make an account with Zenfinex. Need to verify your personal data in the clients area. The bonus allows trading over financial assets however the withdrawal requires a deposit
Receive $50 Joining No Deposit Bonus on Go Markets
18 April 2021
How to Get this promotion offer: You have to register a live trading account with GO Markets. Need to verify your personal data in the clients area. Get the $50 Joining No Deposit bonus and start Forex trading then
Get Free $100 Forex Welcome Credit Promotion offer on ATFX
17 April 2021
How to Get of this $100 Credit Bonus Promotion Offer: You have to sign up a Live Trading Account and  Deposit inside 14 days of record selection during this progression period. You havt to exchange at least 6 parcels
Get Free 1000 Cent No Deposit Bonus offer on Aron
16 April 2021
Instructions to Get 1000 Cent No Deposit Bonus offer: Open a live trading account with Aron Group and check your own information in the customer’s area. Receive 1000 Cents as a gift by creating a Nano account without charging
Get $500 Grand Capital Exclusive Ramadan No Deposit Bonus
16 April 2021
Instructions to Get the $500 No Deposit Ramadan Bonus: You have to sign up or open a record with Grand Capital and verify your phone number. Open Ramadan Bonus $500 Account. Begin Trading and get increasingly more benefit. Reward
Super Lottery NordFX Gives Away 100000 USD to Traders
16 April 2021
The $100,000 Super Lottery was launched by the brokerage company NordFX among its clients on April 1. The name speaks for itself: 100 cash prizes of $500, $1,000, $2,500 and a super prize of $ 20,000 will be drawn
Grab your Amazing 100% Unlimited Sharing Bonus on IronFX
15 April 2021
How to Take and Benefit of this 100% Unlimited Sharing Bonus promotion offer: This bonus promotion offer is only applies for clients who sign up an account through www.ironfx.com. Expanding your asset and Double your first store with the

HotForex launches special trading activity for Ramadan 2021
14 April 2021
Port Luis, Mauritius, April 2021  For the whole month of Ramadan, internationally acclaimed multi asset broker HotForex offers its clients the opportunity to carry on with their trading while helping those in need with a special limited time activity.

At last Free $30 Welcome Credit Bonus on HotForex
15 April 2021
The most effective method to get $30 No Deposit Bonus: Open a record with HotForex. Need to confirm your record for this reward. Send a solicitation the reward. All new customer can get this reward just a single time.
50% Forex Deposit Bonus Up to $2000 on LeoPrime
14 April 2021
Instructions to Get and Benefit of this 50% Deposit Bonus Promotion: Sign up a live exchanging account with LeoPrime. Required Verifications your own data in the client's zone. The award can't be added to inside trade. Deposit into your
Take Free $10 Forex Welcome Bonus offer on BitEcliPse
14 April 2021
Step by step instructions to Get this $10 Welcome Bonus: Register a record with 1 email join in 10 sec. Store Margin and Trade more than 10 part Forex. Report your login ID to our CS from Query. When

Win $20000 to join in Super Lottery offer on NordFX
13 April 2021
How to Win this Super Lottery promotion offer: Register a live trading account with NordFX and Replenishment 200 USD+trading turnover 2 lots=1 lottery ticket. The quantity of lottery tickets for one member isn't restricted. The more tickets you have

The Specialists of the New Mobile App from NordFX
12 April 2021
The specialists of the NordFX brokerage company have developed a new convenient mobile app that allows you to conduct full fledged trading in the financial markets without having to switch to other platforms. The app supports 12 languages and
Take 20% Cashback Welcome Bonus from FBS
12 April 2021
How to achieve this Cashback Offer: You have to Install FBS Trader and activate cashback offer. Get up to 20% of spread. This bonus is available only for FBS Trader and bonus trading period is limited time. Web to
Get 100% Forex Credit Bonus from Xtream Forex
11 April 2021
How to Receive and Advantage of this Promotion offer: Sign up a live trading account with XtreamForex. Bonus Can be withdrawn if volume requirements are met. Effectively brings the stop out level on cash balance to zero. Relaxed time

Axiory 50% Deposit Bonus Promotion Up to $3000
10 April 2021
Instructions to Get and Benefit of this half Deposit Bonus Promotion: Sign up a live exchanging account with Axiory. Need to verify your personal data in the clients area and the honor can't be added to inside trade. Reward
$50 Forex No Deposit Trading Bonus offer from MFM
10 April 2021
Instructions to Take of this $50 Welcome Trading Bonus: You have to register a live Trading account with MFM Securities and Required Verifications your own information in the customers region. Contact account supervisor for No Deposit Bonus. This advancement
Get a mind boggling 100% Unlimited Sharing Bonus on IronFX
8 April 2021
Step by step instructions to get this 100% Unlimited Sharing Bonus offer: This offer just applies for customers who opened a record through www.ironfx.com.uk or www.ironfx.com.au. The Sharing Bonus is simply accessible to customers who store US$500 (or the

Take $2021 No Deposit Welcome Bonus on FreshForex
8 April 2021
How to Get and Advantage of No Deposit Bonus offer: Join a live exchanging account with FreshForex. All New Clients of FreshForex are take an interest in this offer. No Deposit Bonus Size is $2021. Reward Trading Period is